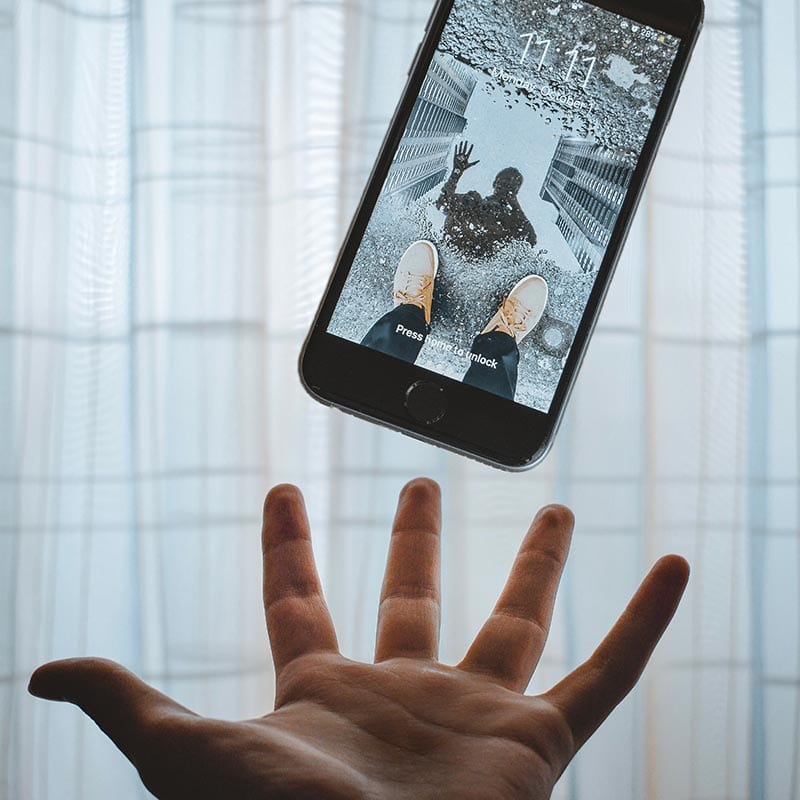 Why do things sometimes get damaged when they hit each other?

Oh, no! I’ve dropped my phone! Most of us have experienced the panic of watching our phones slip out of our hands and fall to the floor. We’ve experienced the relief of picking up an undamaged phone and the frustration of the shattered screen. This common experience anchors learning in the Contact Forces unit as students explore a variety of phenomena to figure out, “Why do things sometimes get damaged when they hit each other?”

Student questions about the factors that result in a shattered cell phone screen lead them to investigate what is really happening to any object during a collision. They make their thinking visible with free-body diagrams, mathematical models, and system models to explain the effects of relative forces, mass, speed, and energy in collisions. Students then use what they have learned about collisions to engineer something that will protect a fragile object from damage in a collision. They investigate which materials to use, gather design input from stakeholders to refine the criteria and constraints, develop micro and macro models of how their solution is working, and optimize their solution based on data from investigations. Finally, students apply what they have learned from the investigation and design to a related design problem.

In this simulation, students are able to explore a microscopic model of friction.

In this simulation, students are able to manipulate the cart mass and speed and then observe how it impacts the collision.

The following PE will be developed over three OpenSciEd units: OpenSciEd Unit 6.1: Why do we sometimes see different things when looking at the same object? (One-way Mirror Unit), OpenSciEd Unit 7.1: How can we make something new that was not there before? (Bath Bombs Unit), and OpenSciEd Unit 8.2: How can a sound make something move? (Sound Unit). This unit will address only the mechanical inputs that transmit signals to the brain through touch. The other units will address electromagnetic and other mechanical inputs (sound) and chemical inputs as well as the connection to signals processing in the brain. This unit, however, does make an important connection to how those signals are stored as memories and how damage to particular structures (axons on neurons) can cause memory loss in concussions.

Besides the disciplinary core ideas that are part of the foundation boxes for the target PEs in this unit, additional connections to the following DCIs are also developed and used in this unit:

PS3.C: Relationship Between Energy and Forces

While this unit engages students in multiple SEPs across the lesson-level performance expectations for all the lessons in the unit, there is one focal practice that this unit targets to support students’ development in a learning progression across the 8th grade year for the SEPs:

In addition, there are three supporting practices that students will utilize over the course of the unit:

This unit is designed to be taught at the start of 8th grade. If it is taught in 6th or 7th grade, be prepared to provide students greater support in the following SEPs. For more detailed information about the focal Science and Engineering Practices in this unit, read the unit front matter in the Teacher Edition.

While this unit engages students in multiple CCCs across the lesson-level performance expectations for all the lessons in the unit, there are four focal CCCs that this unit targets to support students’ development in a learning progression for the CCCs across the 8th grade year:

For more detailed information about the focal Crosscutting Concepts in this unit, read the unit front matter in the Teacher Edition.

Unit Information
What are prerequisite math concepts necessary for the unit?

But because the focus of MS-PS3-1 is on quantitative understanding of the relationship of the kinetic energy of an object to the mass of an object and to the speed of an object, students will need to leverage the following experiences from grade 7 CCS math to use in this unit in Lessons 7 and 10:

Because data from investigations are often scattered due to source of error, even when the expected trend in the data is linear, students are introduced to lines of best fit in Lesson 4 in this unit. They reuse this construct in the Lesson 10 assessment. Students do not have to have encountered this idea in previous mathematics instruction. Lesson 4 assumes that this may be the first time students encountered this idea.

This is the first unit in 8th grade in the OpenSciEd Middle School Scope and Sequence. Given this placement, several modifications would need to be made if teaching this unit earlier or later in the middle school curriculum.

Before this unit, students should understand the following ideas from their experiences in OpenSciEd Unit 6.1: Why do we sometimes see different things when looking at the same object? (One-way Mirror Unit) and in Unknown material with identifier: cl:

They should also understand the following ideas from their experiences in Cup Design Unit and Storms Unit:

An integral component of OpenSciEd’s development process is external validation of alignment to the Next Generation Science Standards by NextGenScience’s Science Peer Review Panel using the EQuIP Rubric for Science. We are proud that this unit has earned the highest score available and has been awarded the NGSS Design Badge. You can find additional information about the EQuIP rubric and the peer review process at the nextgenscience.org website.

Awarded To: OpenSciEd Unit 8.1: Why Do Things Sometimes Get Damaged When They Hit Each Other?