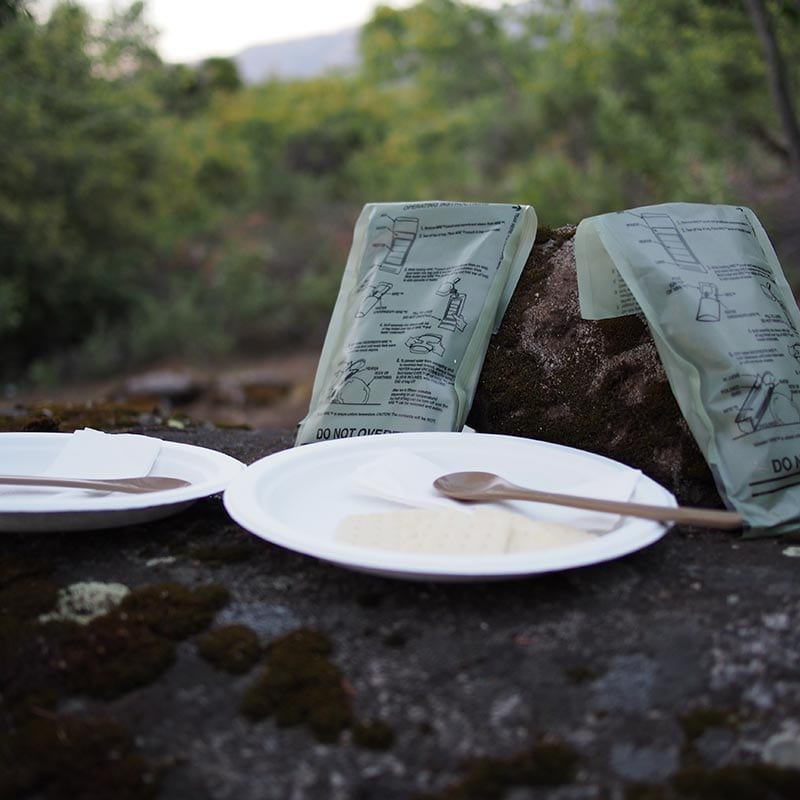 How can we help people make a flameless heater?

*This unit is being revised based on the data from our field test.
This unit on chemical reactions and energy starts off with students thinking about how they would heat up food without having typical methods available. Then they see images from a real
situation, after Superstorm Sandy in New York, during which people were given Meals, Ready-to-Eat (MREs) that can heat up food by just adding water. The class explores the flameless heater from the MRE in action, which seems like some kind of chemical process or possibly a chemical reaction. Students develop an initial model to consider how a flameless heater works, but they also notice some problems with prepackaged MREs. In order to solve some of the identified problems, the class decides to help people in situations in which typical heating methods aren’t available to heat up food by designing a homemade flameless heater with instructions that others could follow.
Throughout this unit, students:
•analyze data to determine patterns in the relationship between the total amount of food they can heat and the amount of energy that is transferred from the chemical reaction to the
food system;
•undertake a design project to construct and test a solution that meets specific design criteria and constraints, including the transfer of energy;
•respectfully provide and receive critiques about design solutions with respect to how they meet criteria and constraints and consider patterns across multiple designs to determine
which design characteristics cause more effective outcomes in performance; and
•optimize the performance of a design that transfers energy through a system by prioritizing criteria, making trade-offs, testing, revising, and re-testing

This unit builds towards the following NGSS Performance Expectations (PEs):

This unit expands students’ understanding of energy in chemical reactions in the context of engineering design. These are the Grades 6-8 DCI elements:

You can view the placement of this OpenSciEd Unit 7.2 and associated units within the OpenSciEd Scope and Sequence document

Focal Science and Engineering Practices
Focal Crosscutting Concepts
Unit Information
What should my students know from earlier grades or units?

This unit directly builds on ideas that students figured out in 6.2 Thermal Energy and 7.1 Chemical Reactions & Matter. If your students have not done those units prior to beginning this unit, it is critical to supplement their understanding of the following DCIs:

PS1.A Structure and Properties of Matter

It will be helpful to have students familiar with using the following focal crosscutting concepts (CCCs) for this unit, specifically around the elements listed here from the 3-5 grade-band. Systems and System Modeling has been listed here because this is an important lens for students to work with in the unit as well.

Students should be familiar with using the following focal science and engineering practices (SEPs) for this unit, specifically around the elements listed here from the 3-5 grade-band.

Planning and Carrying Out Investigations

What are some common ideas that students might have?

This unit will focus a great deal on energy transfer between systems. However, at the start of this unit, students may or may not identify the heater and food as two distinct systems, and they may not yet name energy transfer as the cause for the food heating up. Working with students to use the CCC lens of Systems and System Models will help them accurately identify energy transfers to and from chemical reactions.

A common partial understanding students may have is that, during an exothermic reaction, when the thermometer detects a temperature increase, energy is being put into the system in order for it to feel warmer. This seems logical at first because in the 6.2 Thermal Energy unit students learned that, when objects heat up, energy is being transferred to them. The difference here is that the system of reactants itself is not gaining energy—the system releases energy so that the other surrounding systems, such as the environment, thermometer, and food items, get energy transferred to them and, thus, heat up. As the unit progresses, students will identify that, during an exothermic reaction, energy is transferred to other systems from the chemical reaction system. For instance, the chemical reaction system transfers energy to the thermometer, its container, the outside environment, and the food. That’s why those objects feel warmer.

This is the second unit taught in 7th grade in the OpenSciEd Scope and Sequence. If this unit is taught earlier in the middle-school curriculum, the following modifications would need to be made:

What are the prerequisite math concepts necessary for the unit?

In Lesson 3, students calculate the maximum temperature change for three different amounts of reactants. They report this change in temperature using positive and negative numbers to show the increase or decrease from the starting temperature. Prerequisite math concepts that may be helpful include the following:

In Lesson 4, students determine the relative proportion of each reactant that showed the optimal temperature change by calculating the percentage of each reactant. Prerequisite math concepts that are needed include the following:

In Lesson 6 and Lesson 9, students will scale up the amount of reactants to use in their homemade heaters but maintain the same proportion of reactants they found to be most efficient in previous testing.  Furthermore students then scale down amounts to test their prototypes.  Prerequisite math concepts that may be helpful include the following:

In Lesson 9, students may want to redesign their homemade heaters to increase the surface area of the reactant system that is in contact with the food system. While mathematical calculation of surface area will not be necessary for these design improvements, it may be helpful if students understand the concept of surface area. As such, the following standard may provide a connection point: