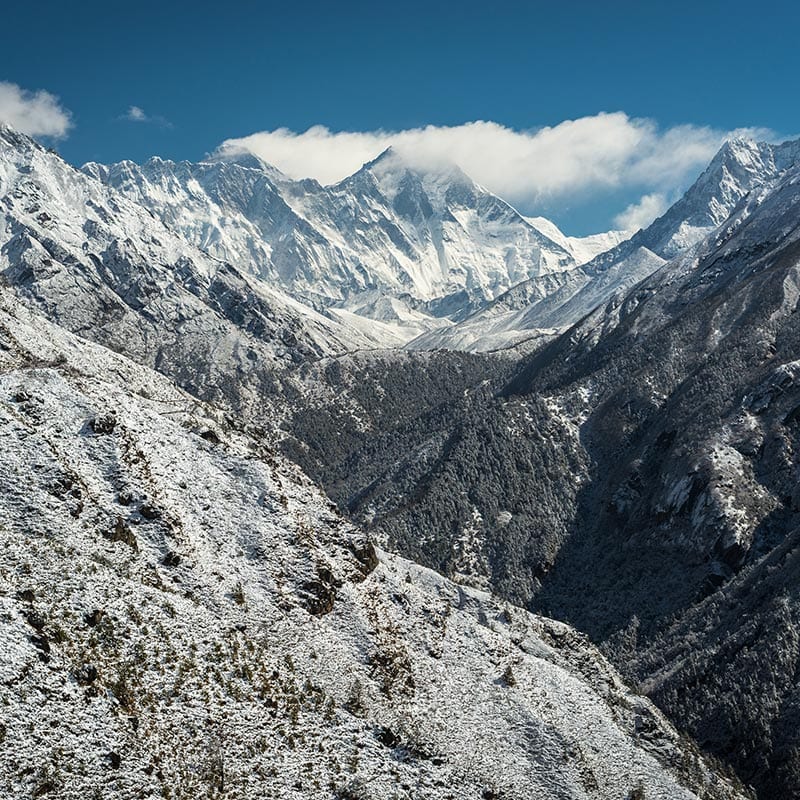 What causes Earth's surface to change?

Mountains move! And there are ocean fossils on top of Mt. Everest! In this plate tectonics and rock cycling unit, students come to see that the Earth is much more active and alive than they have thought before. The unit launches with documentation of a 2015 Himalayan earthquake that shifted Mt. Everest suddenly to the southwest direction. Students also discover that Mt. Everest is steadily moving to the northeast every year and getting taller as well. Students wonder what could cause an entire mountain to move during an earthquake.

Students investigate other locations that are known to have earthquakes and they notice landforms, such as mountains and ridges that correspond to earthquake patterns. They read texts, explore earthquake and landform patterns using a data visualization tool, and study GPS data at these locations. Students develop an Earth model and study mantle convection motion to explain how Earth’s surface could move from processes below the surface. From this, students develop models to explain different ways plates collide and spread apart, ultimately explaining how Mt. Everest could move all the time in one direction, and also suddenly, in a backward motion, during an earthquake. The unit ends with students using what they have figured out about uplift and erosion to explain how a fossil was found at Mt. Everest without having to dig for it.

In this Seismic Explorer simulation, students analyze plate movement first for North American and then for the whole globe. This simulation is used in Lesson 5.

6.4 L4 Where are there Earthquakes in North America?

In this Seismic Explorer simulation, students analyze earthquake data for North America. The data includes earthquake occurrences from the Mid Atlantic Ridge to the Pacific Ocean coastline. Students look at a three-dimensional cross section of North America to visualize how deep underground earthquakes occur in different locations. This simulation is used in Lesson 4

This simulation from https://dinosaurpictures.org presents images of what Earth looked like at different ancient time periods. This is used in Lesson 12 of Unit 6.4.

This unit builds towards the following NGSS Performance Expectations (PEs):

ESS1.C: The History of Planet Earth

ESS2.C: The Roles of Water in Earth’s Surface Processes

While this unit engages students in multiple SEPs across the lesson level performance expectations for all the lessons in the unit, there are four focal practices that this unit targets to support students’ development:

Focal Crosscutting Concepts
Unit Information
How is the unit structured?

The unit is organized into two main lesson sets, each of which help make progress on a sub-question related to the driving question for the entire unit. Lessons 1-9 focus on developing science ideas behind what causes a mountain to grow and/or move. Lessons 10-13 transition to focusing on what can cause other mountains to change elevation and location. In Lesson 14, students apply what they have figured out about how Earth’s surface changes to explain how a fossil can be found on a mountain top.

What are prerequisite math concepts necessary for the unit?

This unit exposes students to movement data using different measurements and time scales, and, importantly, the movement of two objects in relationship to one another. Students wrestle with GPS movement data in different directions and also visualizing the depth and breadth of earthquake patterns using a visualization tool. Prerequisite math concepts that may be helpful include:

This is the fourth unit in 6th grade in the OpenSciEd Scope and Sequence. Given this placement, several modifications would need to be made if teaching this unit earlier or later in the middle school curriculum. These include:

What are some common ideas that students might have?

Students will be challenged in this unit to think about processes that occur on very long time scales and also at very large spatial scales. This will likely be the first time they have thought about Earth system processes happening on scales this large–so large they are really hard to even imagine. Students will likely bring with them some knowledge of different geological time periods (e.g., Triassic and Jurassic time = time of the dinosaurs), but it is really not important for them to know the different names and time periods on a geological time scale. This unit challenges students to think conceptually about how long these processes take to occur, but they will not be asked to identify or name time periods.

Many students may come to the unit with some ideas about “plates” and “plate tectonics.” It is common for students to think that the continents are the plates and they “float” around slowly in the ocean. This unit purposely uses a map with ocean floor topography (called bathymetry) to help students visualize that the bottom of the ocean is part of Earth’s crust too, as the ocean has “plates” that move as well, and many plates include parts of continents and parts of ocean floors.

Finally, many students may come to the unit thinking the inside of the Earth is liquid lava. This is because all the images they see of hot stuff coming out of the Earth is liquified rock, in the form of lava. In actuality,  the mantle is made of molten rock that is more solid than liquid, but it behaves as a very thick semi-solid, similar to putty. This unit uses fluids to demonstrate convection, but it is important to emphasize to students that the inside of the Earth is not fluid lava. Because  we cannot replicate the movement of solids at really, really high temperatures, we utilize fluids like water and oil, because they show convection at lower temperatures.

What additional strategies are available to support equitable science learning in this unit?

OpenSciEd units are designed to promote equitable access to high-quality science learning experiences for all students. Each unit includes strategies which are integrated throughout the OpenSciEd routines and are intended to increase relevance and provide access to science learning for all students. OpenSciEd units support these equity goals through several specific strategies such as: 1) integrating Universal Design for Learning (UDL) Principles during the unit design process to reduce potential barriers and provide more accessible ways in which students can engage in learning experiences; 2) developing and supporting classroom norms that provide a safe learning culture, 3) supporting classroom discourse to promote students in developing, sharing, and revising their ideas, and 4) specific strategies to supporting emerging multilingual students in science classrooms.

Many of these strategies are discussed in the teacher guides in sidebar callout boxes titled “Attending to Equity” and subheadings such as “Supporting Emerging Multilingual Learners” or “Supporting Universal Design for Learning.” Other callout boxes with strategies are found as “Additional Guidance,” “Alternate Activity,” and “Key Ideas” and various discussion callouts. Finally, each unit includes the development of a Word Wall as part of students’ routines to “earning” or “encountering” scientific language.

For more information about each of these different strategies with example artifacts, please see the OpenSciEd Teacher Handbook.

An integral component of OpenSciEd’s development process is external validation of alignment to the Next Generation Science Standards by NextGenScience’s Science Peer Review Panel using the EQuIP Rubric for Science. We are proud that this unit has earned the highest score available and has been awarded the NGSS Design Badge. Read the review for this and all of our other units at nextgenscience.org.

Awarded To: OpenSciEd Unit 6.4: How and Why Does Earth’s Surface Change?